How Thinking and Acting Like an Owner in Ministry Strengthens Your Ministry - Leaders.Church

If you have worked in a business, you have likely either been told or have advised someone to “take ownership of it.” This could be referring to a task, or report, or meeting, or project, department, or anything that you have been given responsibility for.

What was meant by that phrase? If you were on the receiving end, your initial thought might have been, “It looks like that’s mine to lead, but I‘ll still have my boss as an advisor.” If you were on the sending side of that communication as an owner or highest-ranking officer, your message was one of expectation. You were hoping that your employee or team member would understand that you expected them to think and act like an owner.

This subtle truth has been studied and found to have stood the test of time. A leader who wants to embrace full potential will decide to think and act like an owner. This leader does not act as though they are simply playing with organizational resources. They are fully invested, as though it is their investment at stake. This leader/owner accepts personal responsibility for outcomes, gets things done, hungers for growth, takes extra initiative, and overcomes obstacles with creative ideas.

We believe this applies to any leader, including pastors. Think about it. Pastors and business leaders alike all want to grow the organization. They have many of the same responsibilities and concerns. We understand that the money and resources come from the tithe and offering of the people, and ultimately that resources belong to the Lord. But effective leadership commences with the proper mindset.

Back to Video Series
Next Video

Improve your leadership skills with this video series.

Transform your learning with our all-access plan. 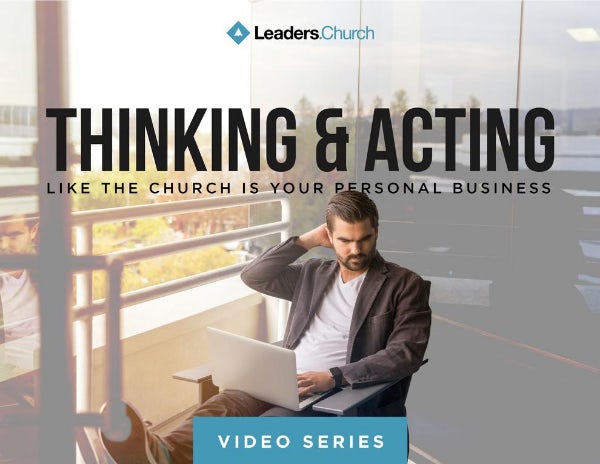 Get instant, on-demand access to every Leaders.Church video series so you can level-up your leadership and improve your ministry skills.

Get Pricing
We use cookies on our website to give you the most relevant experience by remembering your preferences and repeat visits. By clicking “Accept”, you consent to the use of ALL the cookies.
Do not sell my personal information.
Cookie settingsACCEPT
Manage consent

This website uses cookies to improve your experience while you navigate through the website. Out of these, the cookies that are categorized as necessary are stored on your browser as they are essential for the working of basic functionalities of the website. We also use third-party cookies that help us analyze and understand how you use this website. These cookies will be stored in your browser only with your consent. You also have the option to opt-out of these cookies. But opting out of some of these cookies may affect your browsing experience.
Necessary Always Enabled

Performance cookies are used to understand and analyze the key performance indexes of the website which helps in delivering a better user experience for the visitors.

Analytical cookies are used to understand how visitors interact with the website. These cookies help provide information on metrics the number of visitors, bounce rate, traffic source, etc.

Advertisement cookies are used to provide visitors with relevant ads and marketing campaigns. These cookies track visitors across websites and collect information to provide customized ads.

Other uncategorized cookies are those that are being analyzed and have not been classified into a category as yet.